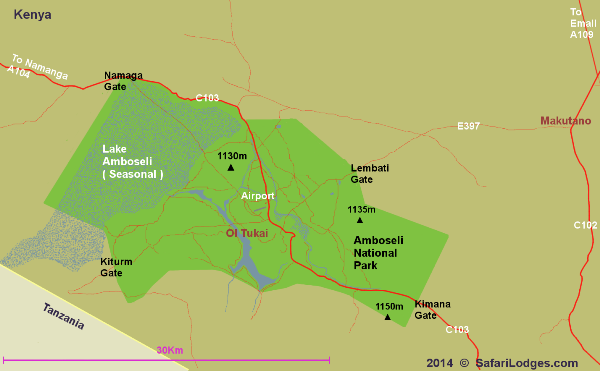 Amboseli is among the premium national parks in Kenya that is most popular and frequently visited. It receives the second largest number of travellers annually second to Masai Mara national reserve. Its main advantage it has over other national parks in Kenya is that its located few kilometres away from the capital city Nairobi hence making it easily reached for even shorter safaris. This makes it easy for the business community who have limited time to reach out to the park for a weekend break before they resume their work on Monday.

Amboseli national park “Home of the African Elephants” is popular due to the over welling Elephant population at the park. Its crowned by the Mt Kilimanjaro the highest peak in Africa. The park got its name from the local Maasai word “Amboseli” which means “salty dust”. The park different habitant has made it one of the best national partks in Kenya for wildlife viewing especially for the big bgame which is found in large populations. You will explore the five different habitats of the park those are: The dried-up bed of Lake Amboseli, Savannah grassland, savannah woodland, Wetlands and the sulphur springs. The park was gazetted in 1974 though it was first established as national reserve in 1906. It covers a total land area of 392 square kilometres. Unlike Masai Mara national reserve, Amboseli is governed by the Kenya Wildlife Services.

The park is isolated among the Kenya other famous destinations like Masai mara national reserve, lake Nakuru national park and others. It’s the only park that is found on the Southeast of Nairobi. It borders the African highest Mountain that is Mt Kilimanjaro of Tanzania. This gives guests clear views of the mountain especially during morning hours when the sun is rising. Visiting Amboseli national park is good for guests who would like to kill two birds at ago by visiting Tanzania and Kenya at the same time. We have some of the new great packages that combine Kenya and Tanzania safaris. Please check out our safari packages and see more.

Amboseli national park is located 365 kilometres or 226 miles Southeast of the Kenya capital city Nairobi. The park can be reached within 3 to 4 hours drive from Nairobi along Mombasa road. Amboseli national park is found in Kajiado County in Kenya. The nearest city or town to the park is Nairobi city which is also the capital city of Kenya. Its closeness to the city gives it an added advantage for guests to start their safaris from Nairobi always. One can also access it through Namanga road though this road is very dusty and bumpy. If your in the South along the coastal area of Mombasa, Tsavo West national park or Tsavo East National park it is about 460 kilometres an equivalent to 285 miles. It takes around 7 to 8 hours drive from Tsavo national parks to Amboseli national park. Tsavo national park is among the only protected areas that are found in the deep far Southern East of Kenya. The park is lonely located making it the only park which you can visit while around that area.

How to get to Amboseli National Park

Amboseli national park location in good geographical area connected with good network of roads has made it to be easily accessed. The park can be accessed through two means of transport those are By road and by air.

There are two main road that connect you from Nairobi to Amboseli national park. All these roads are in good conditions though bumpy hams are available for spend regulations. You will meet several traffic check points which aim at speed regulation and reducing on accidents. The main and commonly used road to Amboseli is through Nairobi via Namanga on Nairobi-Arusha road. This route takes only 3to 4 hours drive covering a distance of 240 kilometres. This route enters the park through the Meshanani Gate. The other route which is short is using Nairobi- Mombasa road via Emali. It takes 3 hours drive from Nairobi covering a distance of 228 kilometres. If using this route you will access the park through other gates. If you’re coming from Tsavo East national park or Tsavo West national park then you will enter to Amboseli national park via Kimana in Olkelunyiet Gate.

The park can also be accessed by air transport with one airstrip found inside the park. This airstrip only receives light aircraft between 3 to 7 people crafts. The airstrip is located Empusel gate where your driver-guide will meet you and transfer you to the accommodation or start the activities of the day. You can also land in Kilimanjaro Buffalo lodge or in the airport in Namanga town. Due to the short distance of the park from Nairobi, it has let it not to develop much with flights.

Amboseli national park location has given it green light to receive more visitors annually. Its easy accessibility from any side both Kenya and Tanzania is remarkable. It is easy to locate it hence even first-time travellers can plan their own safari trip to the park at ease.