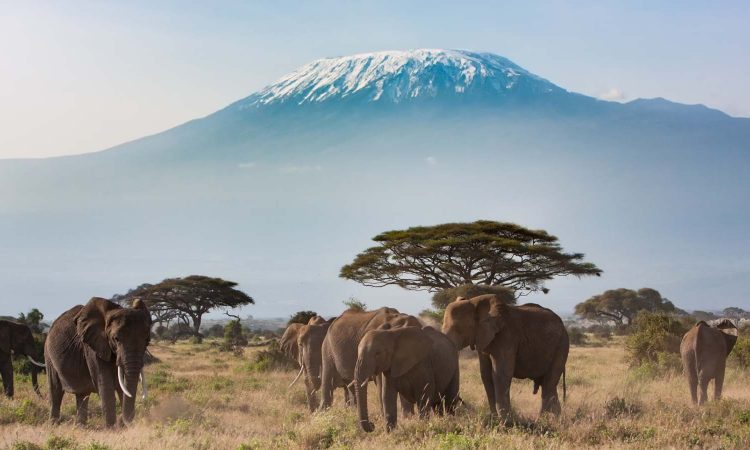 Attractions in Amboseli National Park Kenya: Amboseli national park is the most visited park on Kenya safaris and one of Kenya’s oldest park. Famously known for its wide range of elephants and splendid views of the African tallest mountain ‘’Mount Kilimanjaro”.

The park is situated in southern Kenya covering a driving distance of 365 kilometers southeast of Nairobi which can be easily accessed by either road or air transports.

Amboseli national park sits on land of 39,206 hectares at the heart of an 8,000 square kilometers ecosystem that enlarge across the Kenya–Tanzania border. Note the word ‘’Amboseli’’ derives from Maasai word meaning ‘’Salty dust’ ’in relation to the terrain in the park.

Amboseli National Park is renowned for its high population of free African wild elephants. It is said to owe over 1000 African elephants.

The park offers a great location under the spectacular view of Mount Kilimanjaro the highest free standing mountain in the world.

The park is one of the best places in Kenya ‘’East African Country’’ and the entire world where you can adventure large number of free roaming elephants in their peaceful natural environment and rewardable scenic view of the ice capped mountain.

Amboseli is small in size covering an area of about 392 square kilometers but boosts with number of wild life species as compared to others Kenya national parks. The park’s land is composed of wetlands that support a bio diversity of wildlife and vegetation.

The park’s habitats range from the dried up Lake Amboseli, the savannah, wetlands as well as woodland.

Park’s diversity along dry season, ensures perfect viewing of the large concentrations of wildlife in their natural habitats.

The park is a home to diverse range of species spanning from the Big five mammals, antelopes, leopards, hyenas, giraffes, wildebeests, zebras, monkeys, crocodiles, peacocks, Ostriches among others.

This is a pyramid shaped hill with rewardable summit that allows travelers on walking safari with in the park, where you can have great aerial views or observing the beauty of entire park with it’s vast of game. It’s an ideal point to lookout from the park’s splendid plains, swamps and herds of elephants.

To enjoy the hill a traveler is advised to carry a pair of binoculars to be able to view closer wildlife linking for water from the numerous swamps from below the summit of the hill, it’s thrilled hill that attracts millions of tourists both local and international due to its rewarding scenic nature.

This splendid delta lies just a few meters away from observation Hill in the park’s North part. A point which is a birding haven and to travelers who are interested in Amboseli birding, this can be your stopping point to experience different unique bird species in the park. The place is extremely bushy dominated by Acacia trees that attracts range of giraffes in this area. Not only that but also perfect viewing point for African highest peak ‘’gorgeous Mt. Kilimanjaro.

Amboseli national park is a true birding haven that sounds with over 420 species of birds and 47 species are raptor. Note, birding is one of the most done activity in Amboseli and is best done in rain season when the migratory bird species are present in the park from March to May and also around November. This is the time birds are breeding. Some of birds to be encountered include; water birds –pelicans, crakes, kingfishers, hammertoes other species are Hartlaub’s bustard, Von der decken’s hornbill, Egrets, pelicans, Heron, flamingo, crowned cranes, Pangani, steel-blue whydah Secretary birds, Love birds, Ostriches, Starlings, White-bellied go way bird, Long-toed lapwing, Rufous-bellied heron, Spike-heeled lark, Yellow-necked spur fowl, Taveta golden weaver, Lesser flamingo, Eurasian thick-knee, African swamp hen mentioned but few.

Amboseli game viewing, is best done all year around though the most preferred time is during the dry season of the year which occurs from June to October and December to February.

This is the most tourists’ attraction and the most done activity in Amboseli, since it is notably known as a paradise for African elephants which are recently numbered around 1000 in the park. And a part from elephants, travelers can also sight see other stunned African wildlife like buffalos, lions, Black rhinos, leopards, antelopes, spotted hyenas, peacocks, baboons among others.

The perfect game viewing time is around 6:30am and after evening coffee at 4pm as most of the species embark on their search for food when the day has cooled from much sunshine.

Before even Amboseli national park becoming a gazette national park on this land, lake Amboseli has been existing for over million years and its where the park got its name from. This lake is a supporting water source to the park’s wildlife as well as a great cooling place for sun bathing especially elephants. The lake’s shower is habitat to different swamp bird species that are found in the park.

This lake is one of the attraction in the park where boat cruise can be enjoyed from and thrilling place for game viewing, it’s worth a visit out here.

Amboseli national park has become one of the world’s elephant research project and all these are great works of Doctor Cynthia Moss, who wrote about Amboseli Elephants and Elephants Memories, whose books have famously built Kenya’s tourism destination worldwide.

On your visit to Amboseli you can meet the researches who will explain their good work and other related issues concerning about elephants’ conservation.

Amboseli national park has got poor vegetation that attributes to its dryness being on the leeward side of Mount Kilimanjaro and saline soils which does not support the vegetation growth. This is due to the largest herd of elephant population in Kenya which have cleared all the trees leaving bare ground.

On the other side, bush breakfast and dinner acts as a tourist attraction to visitors looking for peace and quiet place, a bush dinner or breakfast which can be arranged in many lodges in the park and this is one of great way to enjoy natural peace in African wilderness mostly in Amboseli national park Kenya.

The Maasai community are close to the park and are among the few remaining communities in the world that has escaped the influence of western culture and remained in a true traditional way of life. On your visit to Amboseli never leave without meeting the Maasai people where you will get intrigued with their dances and clothing style.

How to get to Amboseli National Park

By Road-Several routes can be able to access you to the park.

The journey starting from Nairobi to Meshanani Gate take 2:30 hours’ drive, for a traveler to be able to reach the gate via Isinya and down the Magadi Road in Nairobi.

Namanga town which is a border town between Kenya and Tanzania from there it takes a traveler a driving distance of about 45-60 minutes to access Meshanani Gate but will depend on the type of the vehicle being used. Note, travelers are advised to always use 4x4wheel drive.

The journey starting from Mombasa the second largest town after Nairobi is easy to access the park through passing Tsavo West National Park via Kimana Gate, these road routes are extremely rewarding with scenic views of the country side and smooth passing through a beautiful small town of Emali on the main road to Mombasa.

By Air: Flying to Amboseli National Park takes a traveler half an hour to access the park’s landing site ‘’Amboseli Airstrip’’.

You can book your chartered flight or scheduled flight from Wilson Airport which lands at airstrips located at Empusel Gate, Namanga and Kilimanjaro Buffalo lodge. Bookings can be made by the trust worthy tour operator.

Amboseli accommodations can be found in and around the park including lodges and campsites.

Amboseli camping sites have no facilities and therefore a traveler is advised to carry their own camping gears, but it does not mean a problem since there is recognized tour operator who can do all the renting arrangements for you. If you don’t mind you can contact us Focus East Africa as your trust worth company on things concerning about tour package booking and other more.

Visit a renowned safari destination in the world for its largest group of free African wild elephants and encounter in gorgeous tourist attractions in peaceful natural of Amboseli National Park Kenya a great paradise for photography.