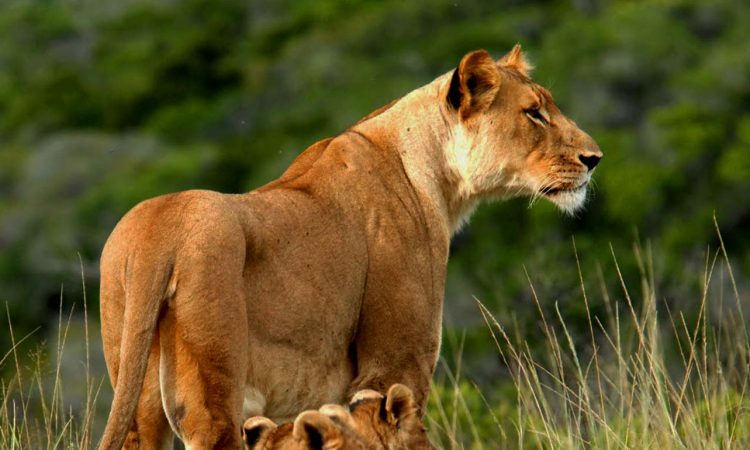 Tsavo West National Park is more famously as a safari destination and is due to magnificent scenery rich in wildlife species, good road systems, reserve for Rhinos, rock climbing potential, Mzima spring and rewarding guided walks along the Tsavo River. However, the park lies in the coast province of Kenya in western part of Nairobi city and it sits on large land that covers an area of about 9,065 square kilometers. In spite the fact that, both national park Tsavo west and Tsavo East national park are closer to each other but the road from Nairobi to Mombasa and railway separates them from the adjoining each other. They both offer with adjoining ranches and protected area which composes the Tsavo conservation area which is under the governing body for Kenya national park known as ‘’KWS’’ Kenya wildlife service. However, Tsavo west national park is absolutely rich in bio diversity which can be spotted in savannah ecosystem comprised of Acacia woodland, open savannah, scrubland, belts of riverine vegetation and rocky ridges like the poacher’s look out where guests can sightsee the teeming herds in the open plains below. Some of wildlife species to be spotted in the park include Cape buffaloes, Eastern black rhinoceros, hippopotamus, elephants, leopards, lions plus other smaller animals like bush baby, lesser kudu, hartebeest and Masaya giraffe and variety of bird life can be seen in here.

Eventually before Tsavo west becoming a gazette national park in 1948, the area was a homeland for Erma and Maasai pastoralists and Waata hunter gatherers. And during that time the indigenous population were relocated Mtito Andei and Voi plus other locations within the closer by Taita hills. It was then followed by Kenyan independence which happened in 1963 and by that period hunting which took place in the park had to be banned thus providing enough security to Tsavo under the protection of Kenya Wildlife service.

Tsavo west national park has become one of the top-visited destinations that attracts photo tourists from all over the world who are interested in experiencing the true wilderness, remarkable terrain and to the climbers who can enjoy park’s cliffs as they explore elephants roaming the plains of Tsavo, sight see eagle, falcons and vultures circling on thermals around the crag with Kilimanjaro and this can be done on clear day. Note that, rock climbing is one of the best done activity in Kenya national parks and this is because of the solid gneiss walls which are often covered in holds and free vegetation. The most stunning piece of rock which measures 300meter high from east face of Kichwa Tembo which attracted first adventure and resulted in the ascent of impressive Tsavo Chimney, the first climber took three days to finish it famously known as’ ’Mastodon’’. Climbing experience starts early in the morning since it often gets very hot on clear days.

Ancient lands of lions which happened during the construction of Uganda railway in 1898 is rewarding.

The magnificent Mzima springs that form the most welcoming and thrilling scene on African land.

Poacher’s lookout and roaring rocks which offer spectacular vintage point view of the movement of herd in the park.

A vibrant volcanic arena, that experiences molten lava which form shetani lava spewed from the earth which has been existing about 200 years ago.

Ngulia Sanctuary; this is area which used to have a highly endangered black rhino but due to poaching that took place in 1960s it made a decrease in number.

Game drive which is done in open savannah grass land and can be enjoyed in 4×4 wheel vehicle open proof for you to be able to spot variety of wildlife species in the park such animals to be spotted include; elephants, buffaloes, black rhinoceros, hippos, lions, leopards, lesser kudu masai giraffes among others.

Tsavo has got thrilling routes where you can carry out your nature walk experience from and have a great sightseeing of variety of bird species such as flamingos, the nature around, have closer viewing of animals like elephants and others.

It is absolutely amazing to encounter the traditional huts of the Masai people, their unique dressing code which is quite rewarding.

Visit Tsavo west national park and participate in the Rhino tracking experience once in life time.

The masai culture dance is quite rewarding has you can enjoy their unique dance as they jump up and down, storytelling.

Accommodations in the park

It takes a distance of 240 kilometers from Nairobi city while using Mombasa road to reach Mtito Andei Gate and other gates include Tsavo, Lake Jipe.

Another option is to fly from Wilson Airport where you can book your domestic flight but this can be done by your trust worthy tour operator. Charter flights are the very possible transport to fly you to Maktau airstrip which is nearby airstrip to the park.

When to visit Tsavo West

Tsavo West National Park can be visited throughout the year.

Visit now the true magnificent piece of African wilderness and also discover the scenic beauty of the park’s species, vegetation and leave with unforgettable experience on African land.