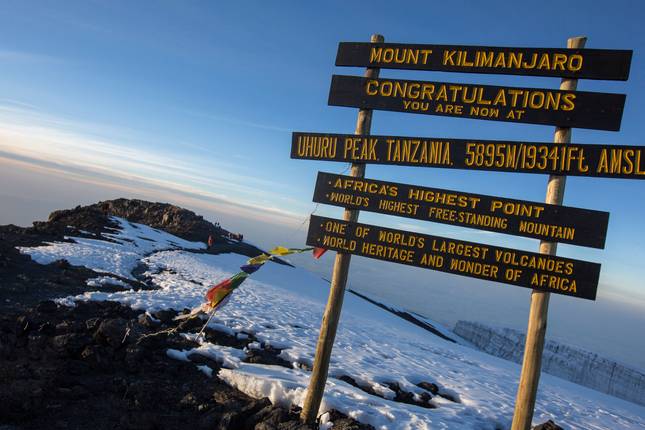 According to geologists, volcanoes are categorized in 3 types that is Dormant, Extinct and Active,

Basing on the definitions and classifications by the geologists, Mount Kilimanjaro is a dormant volcano. This means that although the mountain is not spewing out lava or showing any signs of erupting any time soon, it has potential to erupt one day or become active again.

Note: The difference between extinct and dormant volcanoes lies in the possibility of future eruptions.

Are there any signs of activity on Kilimanjaro

Even though Mount Kilimanjaro is classified as a dormant volcano and might not erupt any time soon, some travelers may be wondering if the volcano shows any signs of activity like gas or tremors.

According to the Wikipedia article about the geologic activity of Mount Kilimanjaro, Kibo – the largest crater on the volcano has gas emitting opening emitting steam and gases such as carbon dioxide, sulfur dioxide, hydrogen chloride and hydrogen sulfide. This flow of these gases is negligible and is not noticed by any climbers meaning climbers should not be worried about the gas either.

Should I Be Worried about Kilimanjaro Erupting?

This lowers the possibility of encountering an eruption or any dangerous volcanic activity on Mount Kilimanjaro and it should be the last thing to worry about.

As a traveler wishing to go for Mountain Climbing adventure or just visiting this glorious mountain, there are some real dangers that you should be worried about when climbing the volcano and these include

As a climber on a mountain Kilimanjaro adventure, you are more likely to suffer from mountain sickness , the thing about mountain sickness if not dealt with it can lead to very serious consequences most especially if you keep climbing after starting to exhibit symptoms.

Note: when you exhibit such symptoms ensure to alert your guides and rapidly descend the mountain.

Climbing mountain Kilimanjaro is not as easy as it seems, during the trekking expect some incidents such as falling or spraining an ankle which can really result into serious consequences if it happens during the climb.

For this reason, you need to carry the right gears and also use a reputable Tanzania safari company such as Focus East Africa Tours that has emergency evacuation protocols that are rapid enough to save your life in case of an emergency.

Although Mount Kilimanjaro is located along the Equator, the high altitude of the volcano results into extremely low temperatures more especially at night. In the night expect temperatures that are below the freezing point and if not well prepared you will have a difficult time doing the Mountain Kilimanjaro climbing safari.

Slippery and wet conditions of the trails used to climb Mountain Kilimanjaro might result into a higher likelihood of falling or getting injured or suffering from hypothermia because of getting drenched in the rain.

The high altitude of Mount Kilimanjaro, the strain on the body and freezing temperatures can result in catching flue which is not only convenient but will hamper your effective climbing up Kilimanjaro.