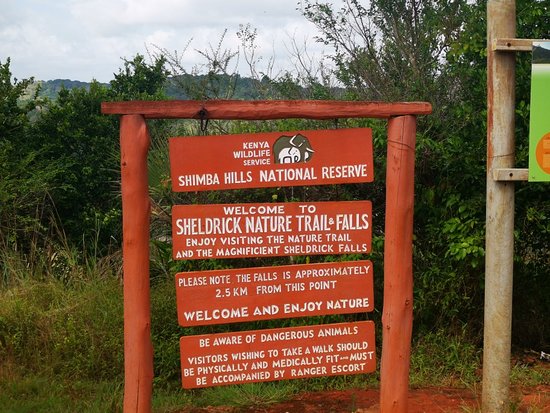 Shimba Hills National Reserve is hoven for rare sable antelopes which cannot be seen elsewhere in other Kenya national park. It’s a small National Reserve located in the coastal province of Kenya only 33 kilometers away from a great town of Mombasa and 15 kilometers from the coast. However, the national reserve is comprised of coast rain forest, grassland, and woodland, one of the biggest coastal rain forest in East Africa after the Arabuko-Sokoke forest. Being one of the largest forest it has contributed a lot to the reserve to host a wide range of flora and fauna and being a home to the largest population of African Elephants in Kenya, other wildlife species to see in the area are unique sable antelopes, bush tailed mongoose, elephant shrew and small mammals like fruit bat s. Furthermore,a great area for plant biodiversity with over 50%of the  159 rare plants to see in Kenya protected areas are found in this reserve, plus some endangered species of Orchids and cycad and others. The reserve is also a great paradise for bird watching with both forest and open savannah grassland birds such croaking cisticola ,red-necked spur fowl and Zanzibar Red Bishop, Eastern violet-backed sunbird, Narina trogon ,Mottled swift ,Red-necked spur fowl ,Spotted ground thrush ,Green tinker bird ,Golden palm weaver ,Ulu guru violet-backed sun bird, yellow-throated long claw ,East coast akalat ,Fischer’s turaco many more .You can still get an opportunity of sightseeing beautiful better flies around .The most scenic side of the reserve is sheldrick Falls as well as dense Mwaluganje forest.

This National Reserve is a highlight of huge population of African Elephant with approximately 700 elephants and Kenya’s only population to inhabits the rare sable Antelopes. Despite the fact that, Shimba Hills National Reserve was established in 1968 on a total an area of about 300 square kilometers, under the protection of Kenya Wildlife Service.

In fact, the reserve is renowned for its large elephant population though in 2005 Kenya wildlife service decided to translocate over 150 elephants to the nearby park Tsavo East National park, it was once described as ‘’the single largest translocation of wildlife species ever undertaken since Noah’s ark’’. But the reserve still boosts with over 700 elephants and the population is increasing and causes human wildlife conflicts with the subsistence farmers in the area. Due to human wildlife conflict that occurred in the area, they decide to introduce Mwalunganje Elephant Sanctuary in the area to reduce on this conflict, this sanctuary shares a boundary with Shimba Hills National Reserve in order to provide the elephants migration corridor.

Due to thick nature of the forest, game viewing is not as gainful as on the savannahs, as many of mammals spend their time deep in the thick forest thus making it a difficult wildlife viewing than that you expected, though you can encounter much more spectacular. The best time of the day to enjoy game drive would be in the late afternoon, when the sunshine has become into a cooler temperatures and animals can easily be seen out of the shade and others linking for water.

Shimba Hills national reserve is a home to beautiful bird life with over 200 bird species recorded at the reserve and 22 species are coastal endemic bird species such as Hornbill, Ostrich Eagle, Falcon, Cuckoo, Guinea-fowl, Honey guide, Quills, ulu guru among others.

Hoven of Sable Antelope which cannot be seen elsewhere in Kenya national parks.

Walking safari where you can be able to connect up to the scenically beautiful sheldrick falls. Sheldrick falls measures 21 meters high and it sits at the heart of shimba Hills national reserve. This is one of the main attractions found in the reserve and was named after the conservationist sheldrick who first visited the falls.

The reserve is covered with natural forest habit to over 1100 tree species which has acted as a researching purpose for the researchers. Offers great viewpoints and five picnic areas.

Walking safari: This is quite amazing trekking adventure done while walking down to the sheldrick water falls, have a great chance to sight see bird life in the forest and be able to enjoy a cool dip waterfall as well as having a great memorable photo opportunity. We recommend visitors to always got out to explore the reserve with a Kenya Wildlife Service’s Guide.

Game viewing experience: The reserve offers great rewardable game viewing experience with quite number of animal species to be spotted such as herds of elephants, hyenas, bush babies, giraffes and many more. You can as well participate in sundowners on pengo Hill which is rewardable as you can be able to watch the sun drop down below the horizon. If you visit the reserve on clear day you can get amazed of spectacular viewing Tsavo plains and African Highest Mountain Kilimanjaro.

On tourists visit to Shimba Hills National Reserve you get excited to the last breeding herds of sable Antelopes with their colorful scimitar shaped horns.

Hiking: The reserve has got several stunned hiking trails which can be led by a guide who leads you for a pleasant afternoon picnic sites and lookout viewpoints of herds of elephants and buffalos plus other multitude of animals and plant species found in the reserve. Travelers can as well hike along shimba hills and Elephant hills which are also great viewing points for variety of animals mostly large herds of elephants.

What to carry with you?

Since the roads are undulating and steep 4×4 wheel drive is required to navigate the safari journey.

The National Reserve has tropical humid with both hot and moist but cooler than that at coast with frequent mist and cloud in the early morning. Contains annual temperature of 24 degrees Centigrade.

Shimba Hill’s National Reserve is a best place for camping, it has got four comfortable and safe camping sites with a great rewarding views of unique sable antelopes, brightening stars at night and such campsites are Sheldrick Walk Falls, Professional, Ocean view and Makadara picnic sites. The reserve has got one owned lodge with nice amenities that suits tourists stay in African wilderness such as Shimba Hills Lodge.

How to get there

From Mombasa, it is easy to take ferry at Likoni to access the southern coastline a location to Diani and Tiwi beaches. Then, take the main ‘’A14’’coat road 10 kilometers southwards until you join the main Kwale Town’’C106’’. The main gate lies at 1 kilometer from the C106 road and 3 kilometers from Kwale.

Alternatively, one can catch up with daily flight from Mio International Airport or Wilson Airport that flies you to Mambosa and thereafter you will join a one –hour drive to the reserve. This is the easiest way to access the park due to long-distance drive.