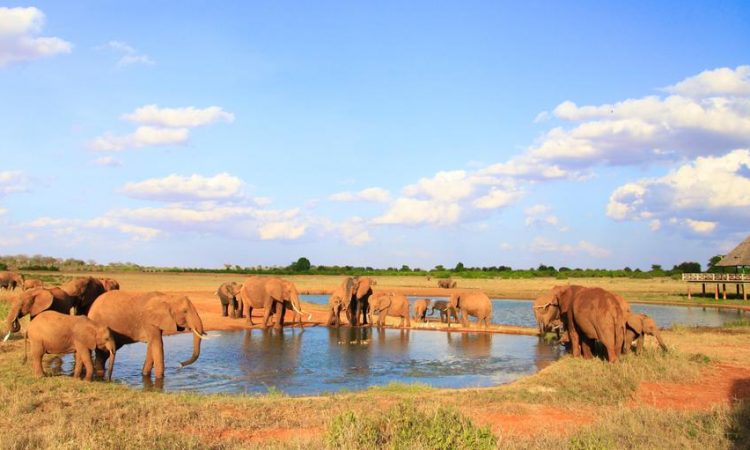 Tsavo East National park is a famous safari destination for wildlife adventure and nature lovers that lies in southeastern Kenya covering an area of over 13,747 square kilometers making it the largest Kenya national park. Above all both national parks Tsavo East and Tsavo west national park form the bigger game reserve sanctuary in Kenya with a total occupying 21,000 square kilometers. The park comprises of open savannah grass land and water source that makes Tsavo one of the best safari destination for wildlife viewing. The park features with high population of wild mammals and over 500 bird species to be spotted in here on your safari to Kenya Country.

Tsavo East national park is visited all year around but the best time for game viewing is during dry seasons which starts from December to Mid- March and June to October when the park is dry. Birding is best enjoyed in wet season when the migratory birds have arrived in the park which starts from April to June and October to November.

Camping in Tsavo East is one of the major experiencing activities done in here and below are some of the Midrange tents and luxury tents and they offer spectacular viewing of beautiful nature around and such safari tented camps include; Galdessa safari camps, Satao camp, Patterson Safari camp, Crocodile Camp.

While on safari tour at Tsavo East a traveler can sleep in unique safari lodge but the price will matter on traveler’s wallet. These include; Voi Wildlife lodge, Tsavo Safari Camp, Kipalo Hills, Kilalinda Luxury lodge, Aruba Ashnil lodge.

Getting to Tsavo East National Park

One can get to Tsavo East national park by road while driving from Nairobi city using Mombasa road in order to access Mtito Adei Gate it take a distance of about 240kilometers.Then to reach Tsavo Gate it cover a distance of 290kilometer. Note that, road transport is extremely rewarding with beautiful scenery of landscape and the country sides.

Alternatively, you can decide to fly to one of park’s airstrip in less than 40 minutes can be Voi Airstrip.

Book now and get interested in numerous species found within the Tsavo East and win the top unbeaten safari adventure once in life time.